English grammar is confusing. Even native speakers can get tripped up by rules, exceptions, and complications. But worrying a lot about grammar is a waste of time and energy. You can’t change what’s wrong with your writing or speaking by stressing over rules, it will only make you feel worse.

1- The whole point is to communicate properly:

When I say grammar is overrated, this does not mean we should throw it out completely. Grammar is still absolutely needed to string two words together and make sense of them.

Knowing enough rules to communicate properly is what is needed.

Even though you may feel like you’re being judged for every mistake you make, remember that most people don’t know any better.
Even native speakers make grammar mistakes.

3- It’s acceptable as long as it’s not a big mistake and you’re making sense:

In American or British culture, making language mistakes is absolutely fine.
Culturally you won’t be judged.

In other words, don’t be concerned about sounding perfect. Communication is a process that involves making mistakes, and the best way to learn a language is to approach it with an open mind.

It’s true that making mistakes in other languages might seem rude, inappropriate or that it doesn’t make you feel accepted.

For example some countries in Asia and specifically a very well-known country there, I won’t mention its name to avoid controversy. They don’t accept if you don’t speak their language fluently, so, it’s a different culture, making mistakes is considered impolite in this context.

Also, in some countries in Europe, the same problem, you don’t feel accepted making mistakes speaking their language, especially if you’re an immigrant.

So when speaking those, do your best to avoid errors in grammar, pronunciation, slang, and other aspects of the language.

Culturally, you should try to avoid mistakes. But fortunately, it’s not the case for English.

4- You can learn grammar naturally:

Generally speaking, we must learn grammar because it is the fundamental building block of a language. Grammatical rules tell us how to form our sentences and when to use certain words or expressions; however, you can also just speak English naturally without needing an instruction manual for every grammar rule. Think about a baby: they don’t read through grammar books to be able to speak, they just copy what other people do and make mistakes along the way, you know; trial and error.
This way you will be able to spot mistakes without knowing why, and you will be like; this sentence isn’t correct… You know… It doesn’t sound right. and you will be able to correct it, which is the whole point. 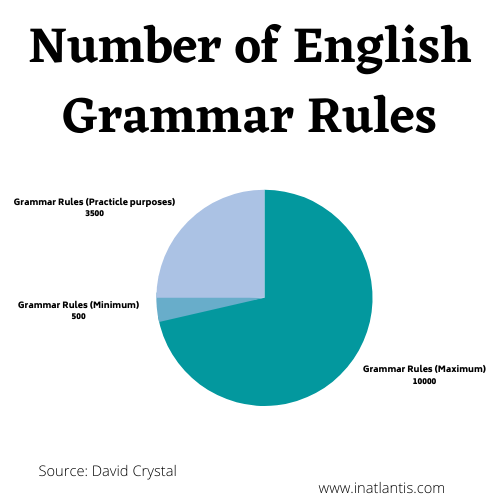 According to David Crystal, who is a British linguist, academic, and author, estimates range from 500 to 10,000, but for practical purposes, we can say that there are about 3,500 grammar rules.

6- What you need to know is less than what you think you might need:

There are hundreds or thousands of different grammar rules in English, but only five fundamental principles every language learner needs to understand in order to communicate properly:

1- Word order: also known as linear order, is the order of the syntactic constituents of a language.

In these sentences, punctuation can change the meaning of the sentences completely:

3- Tense and aspect: This one is so important (Again, I’m not talking about knowing every single rule in it). Tenses and aspects can be used to alter the meaning of verbs by indicating whether they refer to the present, the past, or the future. Similarly, aspect conveys the meaning of whether a particular statement refers to a single event, a regular or repeated action, or an ongoing or progressive action or state.

4- Determiners: Because nouns are rarely able to stand alone without prior context, determiners such as “which” and “how many” are required to convey their meaning. In order to formulate intelligible questions or statements, the correct use of determiners is critical.

5- Connectors: They connect phrases, clauses, or words to one another and express subordination (if, who, that, when, because, etc.).

Let’s be honest, you wouldn’t be reading this article if you didn’t care or worry about English grammar. Just know that there’s no such thing as an ideal English speaker or writer.

So just relax, don’t focus too much on grammar, and learn, listen, and practice the language as much as you can, and eventually, you will be able to speak it fluently.